My fear of little girls singing probably rivals Miss Hannigan's fear of little girls, so I was a bit apprehensive going into Annie this year for my first time (on stage), but the delightful and charming musical is the classic it is for its winning songs and its optimistic outlook and I came out both times humming the tunes with a sunny smile on my face (and I'm still singing it in my head right now).

Annie on Broadway manages to cast some terrifically talented little girls who manages to keep the annoying grating and mugging to a minimum while adults Faith Prince and Anthony Warlow keep command of the stage. Annie at Young People's Theatre uses young adults playing children but it is basically a non-issue with its very young looking cast, and instead, probably provides the most well sung bunch of orphans around. Add in Louise Pitre, Sterling Jarvis and a terrific cast of 14 in the condensed version of Annie (truncated for young audiences), and this simplified version remains a charmer. 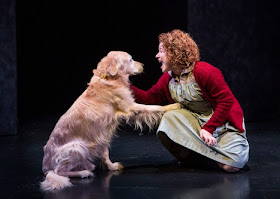 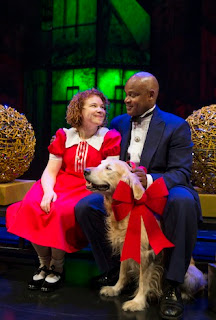 Weisz manages to make us forget her real age with some wide-eyed optimism and her beautiful voice and considering most of Annie's lines are simple two word sentences, it's a great feat to keep her feeling real and naive without making her feel stupid. With a great Sterling Jarvis (Caroline, or Change) commanding the role of Oliver Warbucks, Weisz and Jarvis make for a genial pair and their duets sound terrific.

Shawna Van Omme is a lovely Grace, assistant to Warbucks, and is exactly the loving warm heart needed for that role. Richard Binsley is an amusing Roosevelt, while W. Joseph Matheson and Natasha O'Brien have a fun time in the creepy roles of Rooster and Lily St. Regis. (as well as doubling as Roosevelt's cabinet). Dale R. Miller and his beautiful voice fills in various roles nicely. 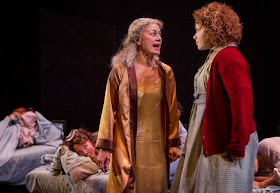 Then there's Louise Pitre (A Year with Frog and Toad, Mamma Mia) who seems to be having a ball chewing the scenery as the scenery-chewing-character Miss Hannigan, the miserable and deceitful woman running the orphanage. Miss Hannigan's entrance is a little anti-climatic, and her punchlines don't always zing because of the underlining piano runs to emphasize them, but it's fun watching Pitre be deliciously horrible at the children and conniving with Matheson's rooster (and her real life partner).

While the singing in this production was top notch, it was underlined by some great choreography by Nicola Pantin. The staging was efficient on a beautifully versatile set by Teresa Pryzbylski and lighted by Michael Walton (although the opening number could have reframed Annie a tad better), and it made the Young People's Theatre stage look grande, especially in the Warbucks mansion scenes and "NYC" scenes. With the voices and harmony sounding so full, the musical arrangements by Diane Leah work well with a simple piano and wind instrument but one can only imagine what those singers could sound like with a full orchestra behind them! 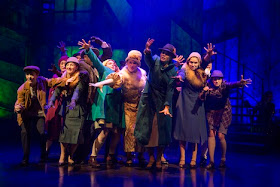 While the Young People's Theatre uses the "TYA" version of Annie, running approximately 80 minutes, I did not really miss much from the longer version (other than the final romantic development between Warbucks and Grace and a final invite for all the orphans to stay), but instead, we got all of our favorite songs without all the exposition and political elements snuck into the book scenes that probably goes way over the head of a large portion of Annie's audience. It was the best-of-Annie without feeling like a best-of collection, and still felt whole and complete. 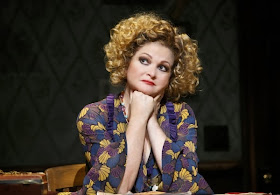 Having the full version is what sometimes stalls the Broadway version of Annie. While current Miss Hannigan Faith Prince (Guys & Dolls, A Catered Affair) is, like Pitre, a Broadway diva eating up the orphans with relish and evil sass (and some great comedic moments), and Anthony Warlow is a wonderful Warbucks, some uneven casting in other roles and some over-extended book scenes with some politically heavy story elements sometimes overtake the pleasure of the core story. Taylor Richardson makes a wonderful Annie, and her child cast mates of orphans are terrific. Jenni Barber (who is no longer with the show) was a great Grace, but some of the other cast members were almost mystifying. Still, the overall production, despite some tightening needed, is still an enjoyable Annie overall.